Feed Me by Rachel Maclean plunges you into a sickly sweet dystopian journey in a world of hardcore contrasts. Walking into the showing you are greeted by soft yellow bean bags, candyfloss pink shag carpeting and baby blue walls. At first, I admire how from the very moment you enter the room you are plunged into an atmosphere designed seemingly by a living angel cake; yet the sweet reception, much like the film, isn’t as it cute as it seems.

The character designs are unnervingly uncanny, dressed in infantile colours – from chick yellow, barbie pink, to baby blue, they seem almost idealistic in nature – however their intentions and actions, are a far cry from their facade of innocence. The film addresses a number of issues affecting today’s society: corporate greed, the sexualisation of children, addiction to apps & games and the inherent dangers of a world that is under constant surveillance.

The setting of the film highlights a number of criticisms of modern society. The streets of this smog-filled inner-city are cloaked in an eternal night – yet you will find an abundance of colour in the advertisements that plague shop windows. Towering above these streets are iridescent advertisements of products made by Smile Inc. The consistent messages of ‘Feed Me’, ‘UR 2 CUTE’, SMILE, Emojis and heart symbols are littered throughout each scene, and are often juxtaposed with sad faces. This facade of consistent messaging celebrates a sense of ‘over-positiveness’, this is akin to some of the coping mechanisms that can be found in people suffering from addiction. A denial of negative emotions and an excess of positive feelings, can be interpreted as unhealthy coping mechanisms.

It is clear that colour plays a big part and is heavily used in the setting of the film to indicate who has control of society – in the offices of Smile Inc the rooms are brightly lit, clean and well furnished. Conversely the room where the Little Girl’s Grandma lives is dark, filthy and is shot in grayscale. Equally the residents of the city are clones that carry a sad face emoji upon their foreheads, devoid of colour. Often colour is used to signal emotions. Maclean uses the extremes from grayscale to oversaturated colours to highlight how Smile Inc uses pervasive advertising and addictive consumerism to drain emotion from the city’s populace. In this way Smile Inc is portrayed as an icing-covered corporate vampire – surveilling, manipulating and draining the general public. 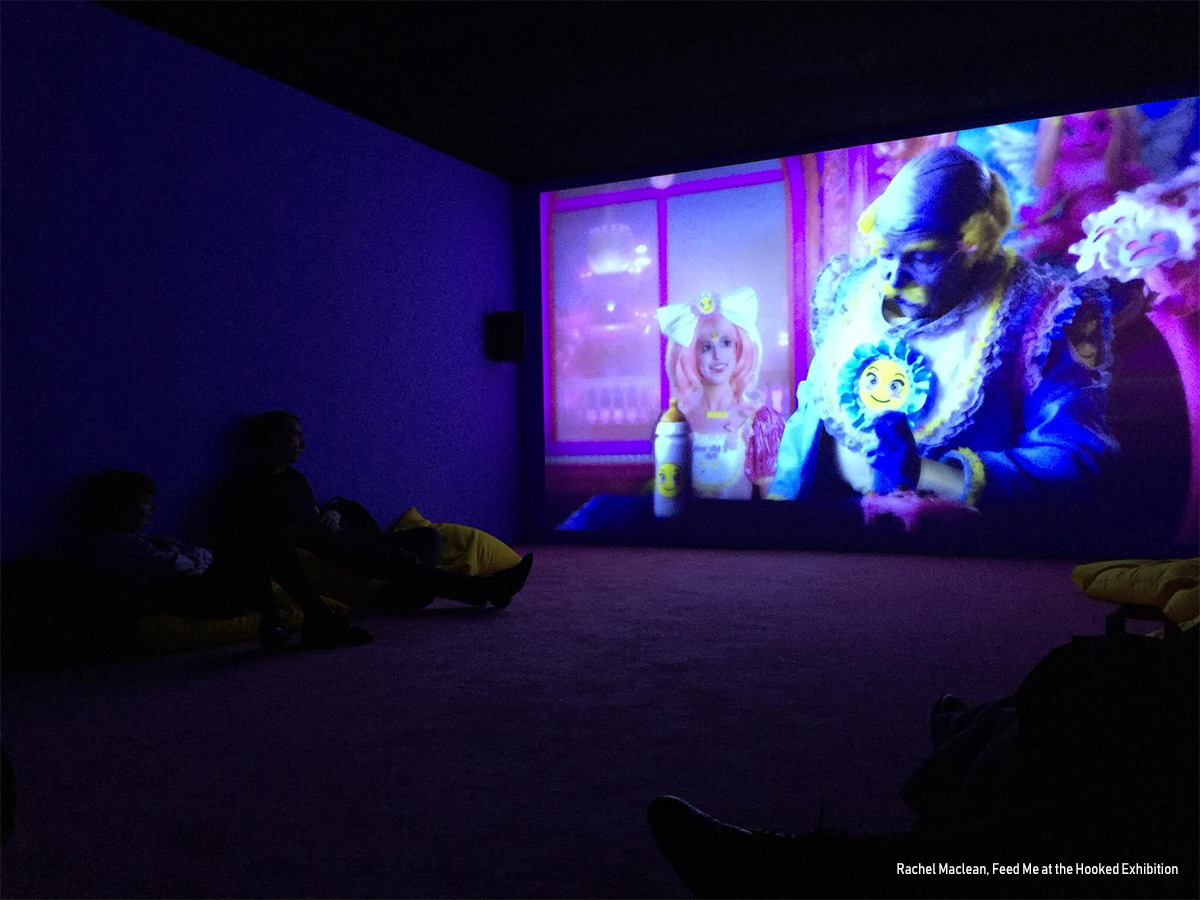 In two scenes, the film presents the Little Girl performing at a talent show (in the same light as the ever popular X-Factor & Britain’s Got Talent); singing #‘If you’re happy and you know it’. In the first scene, riddled with imagery that portrays her in a sexual light, she is seen with a smile on her face and full of boundless energy. In a following scene, she attempts to sing it again, with disastrous results, as she fails to perform the song in the same fervour; crying on stage she is shunned and boo’d by the audience. At the end of the performance, one of the judges remarks that she has fallen from grace and is no longer ‘cute’, thereby lacking the ability to succeed.

This scene invokes the thoughts of the ongoing debate whether children should appear in talent shows. Historically, children who have been engaged in show business from a young age, have often been known to become addicted to drugs and suffer from mental health issues. The nature of show business can frequently expose children to sex, drugs and alcohol. Notwithstanding this, children are frequently faced with feelings of rejection, judgement and remain in the pervading public eye. This is before they are emotionally, mentally and physically developed enough to deal with these negative circumstances.

The exploitation of children for corporate profit runs deeper than we believe. Sugar has been identified as a main cause of heart disease, amongst other illnesses. Yet if you walk into any corner store, supermarket or shopping mall, there are aisles dedicated to marketing sugar-filled products to children. Why is it that in our modern age of ‘information’ we seem to lack the clarity to face these issues head on?  It’s clear that the sugar coated, icing frosted sweet exterior, that runs through the film’s characterisations of the environment serves a deeper meaning. Seemingly we too, even as adults, benefit from the rush of chemicals that eating confectionaries gives us. We wish to be fed too.

Ultimately, the title ‘Feed Me’ can be looked at in a number of ways. Who feeds who? Corporations intent on feeding their profits, exploit others. We too as consumers offer ourselves up so we can feed our own addictions: through surveys, smartphone app permissions or our own innate desire for well marketed products. Overall the film stands as an exceptionally well crafted critique of addiction in modern society, allowing us a chance to gaze through a icing-frosted mirror; into the Candy-Crush loving, X-Factor binging, Gaming addicted, Facebook ‘Like’ chasing society we live in today.

Want to talk to a real person?

For the treatment of alcoholism and drug addiction

I want a free assessment

Smarmore Castle is located near Ardee, County Louth, about 45 minutes north of Dublin, Republic of Ireland and 1.5 hours south of Belfast, Northern Ireland.
SMC use cookies to give you the best online experience. Please let us know if you accept this
Cookie settingsACCEPT
Manage consent

This website uses cookies to improve your experience while you navigate through the website. Out of these, the cookies that are categorized as necessary are stored on your browser as they are essential for the working of basic functionalities of the website. We also use third-party cookies that help us analyze and understand how you use this website. These cookies will be stored in your browser only with your consent. You also have the option to opt-out of these cookies. But opting out of some of these cookies may affect your browsing experience.
Necessary Always Enabled
Necessary cookies are absolutely essential for the website to function properly. This category only includes cookies that ensures basic functionalities and security features of the website. These cookies do not store any personal information.
Non-necessary
Any cookies that may not be particularly necessary for the website to function and is used specifically to collect user personal data via analytics, ads, other embedded contents are termed as non-necessary cookies. It is mandatory to procure user consent prior to running these cookies on your website.
SAVE & ACCEPT